April 30, 2014
Yesterday my cows got turned out on grass. Despite it being a cloudy day, I think they were pretty happy! 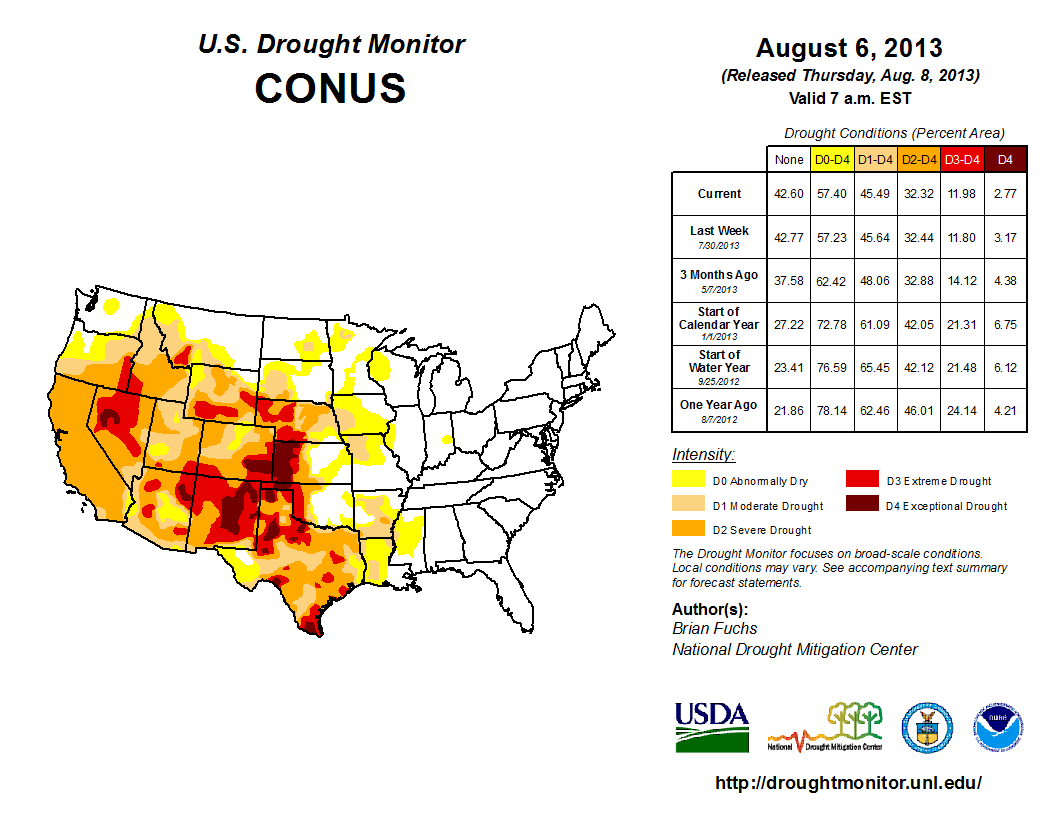 Let me tell you the story of these three cows. Last August my mother brought three of her two-year-old cows to Missouri. In New Mexico they have been struggling with drought, so the cows would benefit from some extra feed. And they did. In the first three months their body condition score increased by one (almost two) units. But, then my pastures ran out of grass, so I started feeding hay, and I started to observe big differences between the cows. I started to notice their feet were sore, and I soon realized I was dealing with fescue toxicosis. Two of the three responded rapidly to 20% protein cube supplementation, but the third one never did. So, I have made a selection decision, and this fall after she weans her calf, the fescue sensitive cow will be culled from my herd.

In a previous post, one commenter mentioned gene-by-environment interactions. In my case, my cow likely has a genetic predisposition to fescue toxicosis sensitivity and then she was placed in an environment containing fescue with a high level of endophytes. Thus, an example where genes and environment interact. This highlights that EPDs are one of many tools that we use when making selection decisions. EPDs only account for additive genetics, and do not consider gene-by-gene or gene-by-environment interactions (additive genetic variation is inherited in a predictable manner, thus the reason we use additive genetic variation to predict EPDs).  In the beef industry we still lack genetic evaluations for many economically important traits such as structure and locomotion, feed efficiency, disease susceptibility, and fertility. Currently, we still have to rely on phenotypic selection (using our eyes) to make selection decisions for these traits.

Graybull quoted Johann Zietsman who stated EPDs for traits like fertility with strong gene-by-environment could not be calculated. Zietsman broke fertility into hormonal balance and body condition. He left out an important player, embryonic lethal variants. These are variants which "break" genes, causing the protein coded by the gene not to function properly. When an embryo inherits two copies of an embryonic lethal variant, the fetus is aborted sometime during the pregnancy, perhaps as early as the first 45 days. In the next four years we will produce a fertility EPD, which will be incorporated into economic selection indexes, that will account for the embryonic lethal load an animal carries. We will deliver a genomic EPD which directly tests the number of variants (alleles) which decrease fertility, and this test will be directly comparable across environments.

Furthermore, 10% of the variation in fertility is due to additive genetics, which excludes gene-by-environment effects. Keep in mind that in EPD calculations, animals are compared to their contemporary groups which are all managed in the same environment. By selecting for fertility EPDs, such as heifer pregnancy, we can improve the 10% of fertility that is due to genetic merit (in other words additive genetics estimated by EPDs). To further improve fertility, we need to take a systematic approach and use best practices to properly manage the fertility in our herds and use phenotypic selection to identify any gene-by-environment interactions.
beef genetics economic indexes EPDs estimated breeding values genomic predictions genomic selection selection

Anonymous said…
Having a small registered herd I am able to see fertility tendencies in certain cow families but it takes several generations to see it play out. The more information, the easier to make sound deisions instead of years of trial and error.
May 18, 2014 at 10:55 PM

Anbarasan14 said…
Awesome Post. Have been waiting for a long time. Thanks for sharing.

Unknown said…
Great post! I really enjoyed reading it. Keep sharing such articles. Looking forward to learn more from you.

harshni said…
This blog is the general information for the feature. You got a good work for these blog.We have a developing our creative content of this mind.Thank you for this blog. This for very interesting and useful.
Artificial Intelligence Training in Chennai

surya said…
I would like to thank you for the efforts you had made for writing this awesome article.
angular js training in chennai

sathya said…
Thank you for posting such informative blogs and posts.
Need best source for career development visit this blog

sathya said…
This blog is the general information for the feature. You got a good work for these blog.We have a developing our creative content of this mind.Thank you for this blog. This for very interesting and useful.

lavanya said…
Thanks for one marvelous posting! I enjoyed reading it; you are a great author. I will make sure to bookmark your blog and may come back someday. I want to encourage that you continue your great postsYour post is just outstanding! thanks for such a post,its really going great and great work.You have provided great knowledge about thr web design development and search engine optimization
Java training in Chennai

Thanks for sharing nice post and nice urging commented at this place, I am in fact enjoying by these.I like visiting your site since I always come across interesting articles like this one. Keep sharing!
Very interesting blog. Many blogs I see these days do not really provide anything that attracts others, but believe me the way you interact is literally awesome
Very useful post and I think it is rather easy to see from the other comments as well that this post is well written and useful. I bookmarked this blog a while ago because of the useful content and I am never being disappointed. Keep up the good work..

Ramya said…
A very nice guide. I will definitely follow these tips. Thank you for sharing such detailed article. I am learning a lot from you.
DevOps Training in Chennai

Rashika said…
very nice blogs!!! i have to learning for lot of information for this sites...Sharing for wonderful information.Thanks for sharing this valuable information to our vision. You have posted a trust worthy blog keep sharing.

devi said…
Great post!I am actually getting ready to across this information,i am very happy to this commands.Also great blog here with all of the valuable information you have.Well done,its a great knowledge..
Data Science Training In Chennai

swaroop said…
Thank you for the informative post. It was thoroughly helpful to me. Keep posting more such articles and enlighten us.

Revathi said…
I feel really happy to have seen your webpage.I am feeling grateful to read this.you gave a nice information for us.please updating more stuff content...keep up!!

prabhu said…
I have read your article, it is very informative and helpful for me.I admire the valuable information you offer in your articles. Thanks for posting it..
IELTS Coaching in chennai

vivekvedha said…
Wonderful blog!!! More Useful to us... Thanks for sharing with us...
acte chennai

radhika said…
Great post! I really enjoyed reading it. Keep sharing such articles. Looking forward to learn more from you.