Showing posts from January, 2017
Show all

AgFRONT: The Path To A Successful Technology Commercialization

January 28, 2017
By Elisa Marques Over the last 15 years, I have seen successful launches and some real flops in the path to genomics and biotechnology commercialization. If I were to think about the times we were successful, I would say that in almost all of those cases, we had mastered every single aspect of: Knowing Our Industry’s Players Understanding Our Audience Building a Team of Trusted Advisors The examples mentioned here are specific to the livestock industry, but the strategy itself goes well beyond this industry. For the full article visit the AgFRONT blog .
Post a Comment
Read more 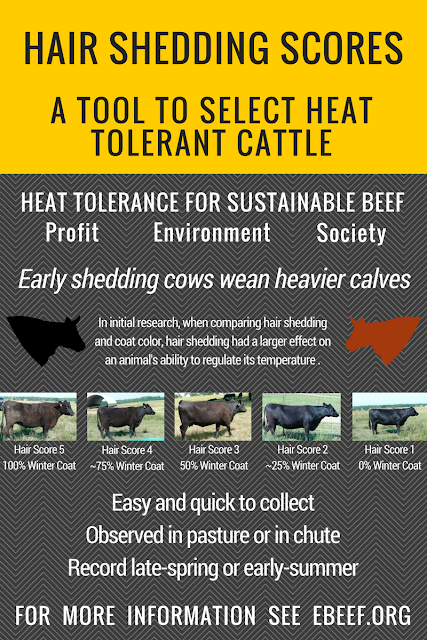 I have published a new fact sheet at eBEEF.org , titled " Hair shedding scores: A tool to select heat tolerant cattle. " Hair shedding scores are an easy and effective way to measure cattle’s ability to cope with heat stress. In this fact sheet, learn the how, when, and why of hair shedding scores. As part of our work in matching a cow's genetics to her environment we have recruited 8,000 cattle to participate in a hair shedding genomic project . Producers collected hair shedding scores on their cattle and are sending us DNA samples for genomic testing. This work was supported by the USDA-NIFA [grant number 2016-68004-24827, Identifying Local Adaptation and Creating Region-Specific Genomic Predictions in Beef Cattle ].
Post a Comment
Read more

January 09, 2017
My second piece on genomic prediction was published in the Brangus Journal back in December. The Dance Steps of Genomics Part II: Using Genomics in Your Herd This piece discusses how we get started with genomic testing. What animals should we DNA test and when should we test them? The first article in the series is available here .  What do you think of the article? As always, your feedback is welcome. Loading...
Post a Comment
Read more

Hat tip to Dr. John Cole, USDA, and Jesse Hoff for bringing this to my attention on Twitter . I need to make an important point: I am not a patent lawyer. I do not have a deep understanding of patent law and nothing in this post should be considered legal advice or council. On November 8, 2016 Canada issued a patent to Ben Hayes and Michael Goddard for genomic prediction. Genomic prediction is estimating an animal's breeding value (i.e. genetic merit) using DNA variants. See the Canadian Intellectual Property Office website for more detailed information about the patent. Meuwissen, Hayes and Goddard first published their work on genomic prediction in 2001. Hayes and Goddard filed for a patent of the method on December 21, 2007 with the United States Patent and Trademark Office. About 23 days later, the Illumina BovineSNP50 Beadchip, a DNA test that can test 54,000 DNA variants quickly and cheaply for cattle, was released at the Plant and Animal Genome Conference. This 50K
Post a Comment
Read more
More posts
Follow @pop_gen_JED