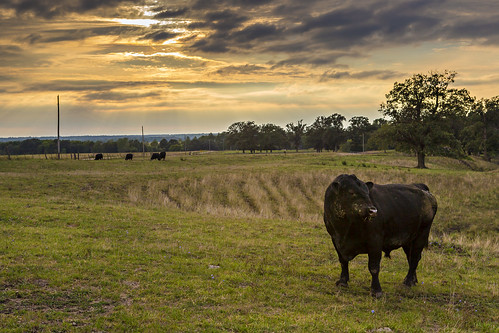 I had a brief meeting with Dan Moser of Angus Genetics Inc today in which he informed me of several updates to the American Angus Association's genetic evaluations.

First of all, heifer pregnancy EPDs, which were not estimated this summer, are once again being successfully estimated. When the dataset became large the analysis would no longer run properly. Previously, the heifer's service sire was fit as a fixed effect in the EPD equations. This means sires were forced to have the same conception rate in every herd. In the new model, the service sire's conception rate is fit as a random effect, meaning that we do not perfectly measure the conception rate and allow for factors that influence conception, such as differences in semen handling, to vary between herds. The base year of the heifer pregnancy EPD was also changed from 2000 to 2005 due to 2005 being the earliest year with a large amount of pregnancy data.

Second, the fourth recalibration of Zoetis' genomic predictions was completed this summer. Very few changes were seen. The only trait that saw some movement was carcass weight. With over 60,000 animals genotyped most of the diversity within U.S. Angus has likely been sampled. Further, the effects of the approximately 50,000 SNPs have likely been accurately estimated.

Lastly, feed intake data will be incorporated into the $B (dollar beef) economic index this December. This is done to account for feed efficiency differences between animals. The cost of feed is a major driver of profit in the feed yard. The Angus Association now has sufficient data to include this important economically relevant trait in the $B index. Many sires that previously ranked high for the $B index will continue to rank high because they have excellent feed efficiency. But, many sires that have excellent growth, marbling, and yield, yet because their progeny inefficiently use feed will rank lower for the $B index. So, if your favorite $B sire drops in the rankings come December you now know why. This knowledge will allow you to make corrective matings in the future to increase the feed efficiency of your herd.

*My apologies to AGI staff for inaccuracies that appeared in the first version of this post.