Breed composition: it’s like chocolates you can’t tell what’s inside just by looking at them

“My mom always said life was like a box of chocolates.  You never know what you’re gonna get.” – Forrest Gump

First, we can pick out the white chocolates and may even be able to separate the milk chocolates from the dark chocolates.  This is similar to our ability to visually evaluate breed characteristics and sort livestock into different breed or subspecies (Bos taurus or Bos indicus influenced) based on breed characteristics.  However, such visual evaluation of breed composition is not terribly accurate.  For example, biting into a piece of dark chocolate and finding a nut when you were expecting caramel.  Crossbreeding is an important tool in the cattle industry, as it enables us to capitalize on breed complementarity and hybrid vigor.  However, crossbreeding complicates our ability to accurately sort animals into breeds based on breed standard traits.  Imagine a box of chocolates that contains a few chocolates that appear to be covered in both white and milk chocolate.  Do we sort these chocolates into the milk chocolate group or the white chocolate group?  Or, perhaps a new ‘hybrid’ group, since neither of these groups really reflects the correct composition.

Second, a box of chocolates includes a diverse assortment of “fillings”.  The “fillings” cannot typically be determined from just visual evaluation.  The different “fillings” provide another challenge to our being able to sort the chocolates into groups.  Without reading the decoder in the box (isn’t that cheating?) or just taking a bite out of each of them (no judgment on my part if that is your routine!), we cannot accurately sort the chocolates.  The “filling” of the chocolates is directly analogous to the DNA of an animal.  If we keep breeding records on our animals, we can sort the animals based on their pedigree and breed registrations.  For example, if we have offspring from a registered Angus sire and a purebred Simmental dam, we can assume that the progeny will be 50% Angus and 50% Simmental.  But, what about if we take this progeny and breed it to a registered Angus? Will the resulting grandprogeny be 75% Angus and 25% Simmental? Due to the random assortment of DNA (chromosomes) into the sex cells, these proportions can vary. Not only can they differ from the 75/25 mark in an individual, but full-sibs produced from exactly the same mating can also be comprised of varying grandparental breed proportions.  Who knew that sorting a “box of chocolates” could be so complicated?

Understanding the breed composition of animals is a challenge, especially for genetic researchers.  Not all members of a breed are identical. Each breed was formed by an initial sampling of animals that were considered to be “characteristic” of a desired breed type.  Later selection and breed development produced breeds that differed for carcass qualities, maternal ability, or even adaptability. These characteristics make the breeds valuable to the industry.  In addition, each breed may have different mechanisms underlying variation in traits, such as feed efficiency or marbling.  Differences in traits between breeds reward both the producer and the consumer when crossbreeding is used.

However, in certain genetic analyses we often need to understand the breed composition of animals to appropriately use the data. For example, when markers are used to generate estimates of genetic merit for traits such as feed efficiency, the resulting prediction equations will only be useful within the breeds that are represented in the training data set.  So understanding the breed composition of the animals will guide us in understanding how broadly useful the resulting prediction equations will be. Because of the inaccuracies of breed identification of crossbred animals using visual measures, a method to determine breed composition based on sampling the “filling” will provide a more accurate measure.  We have developed an analytical method to estimate the ancestry/breed composition of crossbred animals based on their DNA data.

You may have heard of or even participated in the 23andMe, Ancestry.com, and other genetic tests that are used to predict your ancestry.  You know, you used to dance in your lederhosen until you found out that you were Scottish and so now you wear a kilt! Think of our method as the 23andMe analysis for cows.

So how does the analysis work? In ancestry analysis, the observed data are DNA genotypes for animals which may be full-blood, purebred, or crossbred and the inferred factors are the ancestral or “reference” breeds.  To conduct the analysis, the first and most important step is to determine a set of reference population animals that genetically define the frequencies of genotypes at each tested variant among the members of each respective breed.  As you might expect, this makes it extremely important that the breed definition for the “reference” samples is correct.  In addition to being the most important step, determining the subset of samples that represents the diversity within each of the “reference” breeds is technically difficult.

The reason for this is that the concept of breed and breed membership is man-made, and has not persisted in nature. The creation of species is a complex and lengthy process taking tens or even hundreds of thousands of years.  On the other hand, the development of livestock breeds is a very recent concept, beginning with domestication of cattle about 10,000 years ago and leading to the formation of herd books approximately 200 years ago.  Compared to the thousands of years cattle have roamed the earth happily mating at random, we should probably only expect that regions of the genome with large  effects on traits that define breed characteristics have been subject to human selection and resulted in breed differences. However, the phenomenon of drift in DNA variant frequencies over the last 200 years has caused enough differences in frequencies among breeds that we do in fact find signal for breed identification. Our software’s output can be represented by a figure similar to Figure 1.


The software does not know which animals were chosen to represent each breed but simply clusters them together based upon genetic similarity. We then arrange the output according to the animals that were selected to represent each breed to produce Figure 1. Each block contains a dominant color that is representative of each breed.  There also appears to be small levels of mixture represented by the colors in the top and bottom of each block for almost all the breeds. One interpretation of this is that there is a shortage of statistical power to completely predict breed ancestry.  However, this does not seem to vary much as we increase the number of markers used in the analysis. So, this result could suggest that these samples do not represent purebred animals. But, this is not the case in the recent sense, as the animals sampled to represent each of the breeds were traced by pedigree to ensure that they were purebred.  What appears to be more likely is that this represents breeding events that took place before the foundation animals for each breed were selected. Two simple examples of these events are the polled and coat color variants found in Hereford cattle.  The polled mutation in Herefords is identical to the mutation found in Angus cattle (and other Celtic breeds) and the Hereford coat color variant is only found in white-faced European cattle (e.g., Simmental). This indicates that these variants, and therefore breeds, have common, albeit, common distant ancestries.

The current software version functions to provide estimates of the genome-wide ancestry of individuals.
Future versions may allow ancestry estimates for specific regions of each chromosome.  It provides a method for determining the breed composition of individuals with no pedigree information, and that were perhaps generated in a commercial environment employing various crossbreeding systems.  Figure 2 illustrates how the genomes of crossbred animals can be separated into components originating from their ancestral breeds, with no pedigree information included in the analysis. By establishing the ancestry of these individuals, we can determine cohorts for use in association studies or other downstream analyses such as the genomic prediction of EPDs. 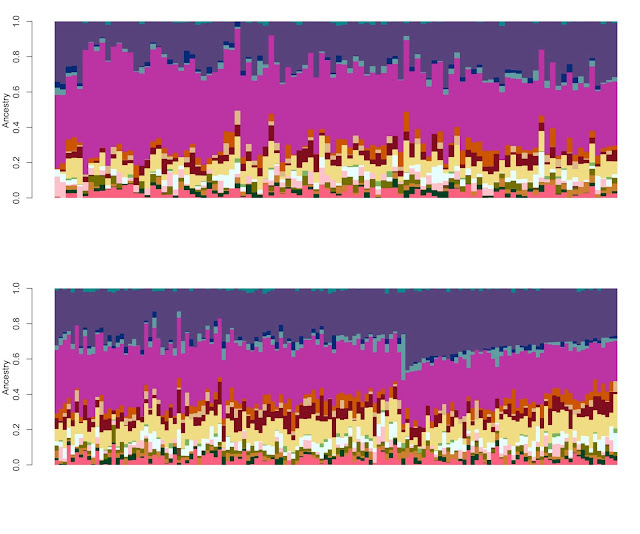 The goal of this research is to develop an analytical pipeline that will enable the detection of the breed composition of crossbred animals based on animals defined to be representative of specific breeds. We will then use this information to enhance the analysis of genetic and trait data. Opportunities for the use of this information are only limited by our imagination.  It was once stated on 23andMe’s website that, “Your DNA can tell you a lot about your family, your health, your relatives, your ancestry, your traits, and you.”  (https://www.23andme.com/dna-health-ancestry/). We hope that this software can help us do just that for cows.

Tamar Crum is a PhD student at the University of Missouri.  This research is part of a study entitled “Inference of Admixture for Cattle with Complex Ancestry”.  This article was written as part of a Walton-Berry Award given to the Decker Genomics Group at the University of Missouri, which paid for four graduate students to attend the Beef Improvement Federation Conference held in Athens, GA in June 2017.