December 14, 2018
University of Missouri's Southwest Research Center near Mt. Vernon hosted an open house December 3rd that gave attendees a peek at the direction beef cattle research is taking at the 890 acre Center. 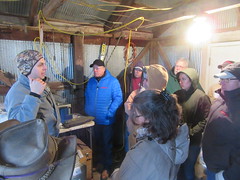 "When you go to a bull sale you should be there to buy genetics, not environment or management," said Decker. "EPDs should be used for the long run because they work."

Decker shared data from the University's Thompson Research Center at Spickard where technology allowed them to make impressive progress in growth and carcass traits. For example, weaning weight has increased an averaged of 1.5 lbs. per years. The percent of carcasses grading Choice and Prime has also made dramatic improvement.

Under Decker's and Thomas's leadership the current Angus, Simmental and Hereford, 115 cow herd at the Southwest Center will transition to a Red Angus, Hereford cow base focused on fertility and profitability. Later a terminal crossbreeding program will use Simmental and/or Charolais bulls. Economic selection indexes, stayability, and heifer pregnancy will be the focus of selection decisons. Decker and Thomas along with Southwest Center Superintendent David Cope say they intend to get more females bred and improve the fertility in the growing cow herd.

"The big EPD driver in selection is stayability as they target optimum cow size and milk on fescue in a fall calving system," said Cope. 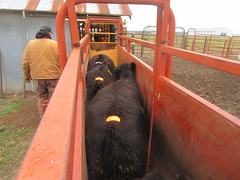 The event concluded with attendees moving to the north part of the center. There, Thomas led the demonstration of artificial insemination of 35 yearling heifers that had been synchronized using the 14-day CIDR protocol. A heat detection patch had been placed on the heifers' rumps and if that morning the patch indicated they had been ridden sufficiently they were inseminated. Eight heifers did not have their patches worn adequately and they were held over and bred 24 hours later.