Showing posts from June, 2019
Show all

June 20, 2019
Larry Kuehn and Tara McDaneld U.S. Meat Animal Research Center Bovine Respiratory Disease may be hard to diagnosis. Have to keep in mind that prey animals, like ruminants, have evolved to hide being sick. What are the BRDC pathogens? Bacteria Mannheimia Haemolytica Pasteurella multocida Mycoplasma bovis Others Virus Parainfluencza-3 Infectious Bovine Rhinotracheitis Bovine Viral Diarrhea Bovine Respiratory Syncytial Virus Bovine Coronnavirus (implications relatively recent) Viruses typically aren't severe on their own, but they are often the gateway for bacteria infections to start. Difficulty of BRDC treatment records as phenotypes Disease incidence measured as 0 or 1 Subclinicals/shedders analyzed as healthy How do we overcome these difficulties? Large sample sizes are needed. USDA MARC is not using a subset of USMARC Germplasm Evaluation Program. MARC is also working to improve the quality of diagnoses/necropsy. They are also looking for indicato
2 comments
Location: Brookings, SD 57006, USA
Read more

BIF 2019: The use of 'Big Data' in a modern swine breeding program now and in the future

June 20, 2019
Jeremy Howard Smithfield Premium Genetics  Smithfield Premium Genetics is the nucleus that provides sows (over 1 million) for Smithfield and the sires of the terminal market pigs. At Smithfield, they mate a Landrace to a Large White to produce the commercial F1 sow. These sows are then breed to a Duroc. The terminal pig then has maximal heterosis (maternal heterosis and direct heterosis). SPG uses single sire semen of Durocs to mate to commerical farms in Missouri and North Carolina. They collect 60,000 carcass data points per year. On the maternal side, it is had to get stayability data because generations are turned over so quickly. They use commercial test herds to collect this data on sows. Howard said that genomic information on purebred animals prior to selection allows them to better predict performance in a commercial setting. This genomic data also allows them to figure out if problematic meat is produced at a company owned farm or an outside source. Big data is driven
2 comments
Location: Brookings, SD 57006, USA
Read more

BIF 2019:The Latest Agri-Tech Emerging in the Australian Grazing Industries

June 20, 2019
Mark Trotter Central Queensland University His research is outcome, not technology driven. It is not finding shiny new tools and asking how can I use it. Rather, it is looking at problems in the industry and finding solutions, including technology, to help it. Northern Australia is much more similar to central America that it is to the United States. Southern Australia is similar to the southern US. There are several tools for stocking rate management, but there is a need to get good tools into these systems. There is now high spatial and temporal satellite data  that is now basically available for free. There are emerging radar satellite systems. There's a lot of hype around "smart tags" and other agtech, but what's the actual need and value? There are three key bits of information producers would love to have from a sensor system: Location Behavior Health Producers see lots of applications for smart tags. Location We went from big backpacks on ca
1 comment
Location: Brookings, SD 57006, USA
Read more

BIF 2019: The Next Generation of Genetic Tools

June 20, 2019
John Genho Neogen GeneSeek Why do we use a crossbreeding system? To gain the advantage of heterosis, the cross outperforming the parent average. Retained heterosis is the amount of this advantage that is maintained after multiple generations of mating crossbreed animals (not mating the purebred parents). Dominance, over dominance, and epistasis likely all contribute to heterosis. In general, traits with higher heritabilities have lower heterosis and traits with low heritability have higher heterosis. Why don't commercial producers use crossbreeding? The average herd size is 40 head and 9% of herds have >100 head. It is harder to implement a crossbreeding program in a smaller herd. Researchers in Canada have developed genomic indicators of retained heterosis. They use the genomic data to infer the breed proportion of the animals. They can then square these breed proportions, add them up, and subtract from zero to estimate the retained heterosis. Another approach is to
4 comments
Location: Brookings, SD 57006, USA
Read more

June 19, 2019
Jeremy Taylor University of Missouri Taylor is going to cover several things: GGP-F250 Imputation Haplotype diversity Embryonic Lethals The GGP-F250 is a very unique assay compared to other SNP panels. All of the other available assays (SNP panels) use common variants. The GGP-F250 has many rare variants, most of which are located in genes or other functional elements. Why is rare variation important? Most of the variation in mammalian genomes, including the genomes of cattle, contain rare variation. Most of the DNA differences between different individuals are rare variants. We can't tag this rare variation with the common variants included in most SNP panels. To accurately measure genetic differences (and predict EPDs), we have to account for rare variation. Imputation is the process of: 1. Sorting DNA variants onto each chromosome (phasing) 2. Filling in missing genotypes We can impute from 50,000 SNPs to 700,000 SNPs to 15 million variants. But, we can'
1 comment
Location: Brookings, SD 57006, USA
Read more

June 19, 2019
Alison Van Eenennaam UC-Davis United States beef cattle inventory has decreased since the 1970s. However, over that same time period, we have produced more beef. This means we are more efficiently producing more beef per cow. This is very different compared to other countries such as Brazil and India. We have seen inflection points in the genetic progress of beef production as various technologies have been adopted? Will gene editing be that next inflection point? Gene editing technologies are simply scissors that cut DNA. There are various types, such as Zinc Finger Nucleases, TALENS, and CRISPR/Cas9. CRISPR has become very popular recently because it uses a guide RNA to make the cut at a specific location. CRISPR can make site-specific variants (mutations) as the cell repairs the double stranded breaks. CRISPR can also be used to insert new sequence from a different animal, species, or kingdom. There are 13 papers that describe edits for 12 different traits in cattle. Gene
Post a Comment
Location: Brookings, SD 57006, USA
Read more

June 18, 2019
Brent Mason Mason-Knox Ranch Mason-Knox Ranch develops heifers to market bred heifers. They like to purchase the heifer calves back from their customers. They also like to breed heifers to producer heifer calves, because we know that heifer calves are lighter compared to bull calves. Mason also sees an opportunity to quick change a cow herd by using sex sorted semen. Mason said, "Those who know me, know I'm a nervous nelly." The first time they did split time AI, Mason looked at all of the heifers in the hold pen and was nervous. Dave Patterson told him to eat dinner. Mason ate dinner, came back, and still very few heifers in heat. Patterson said, "Just let them be." Next morning, lots of heifers were in heat. Mason also sees opportunity for sexed-semen in seedstock. Think about breeding that cow who always produces a great bull, to male select semen. "There is a difference between burlap and satin," Mason quoted a friend. Mason believes in us
15 comments
Location: Brookings, SD 57006, USA
Read more

June 18, 2019
Jordan Thomas University of Missouri NAAB Symposium Why do we care about sex sorted semen? For any on mating, one sex of calf is always more valuable. This is due to genetic potential and your marketing program. What is the value difference? What is the true cost of using sex sorted semen? Does the value difference justify the cost? In a perfect world, pregnancy rates would be identical between conventional and sex-sorted semen. But, this is not true. Further, the bull you want to use may not have sex-sorted semen available due to sorting or fertility factors. Sex-sorted semen is also very sensitive to the timing of estrus in a timed synchronization program. Lastly, sex-sorted semen is not free! There are direct costs (cost per straw of semen) and indirect cost (lower pregnancy rates, estrus detection, more complicated protocols). Unlike the dairy industry, we have a fixed breeding season in the beef industry. If a dairy cow is not breed using sex-sorted semen, we just AI
1 comment
Location: Brookings, SD 57006, USA
Read more

June 18, 2019
George Perry South Dakota State University NAAB Symposium Assume that a cow breeds 30 cows per year for 4 years. Regardless of the year, bull price per calf sired was higher than the cost of semen. We could have different bulls for different groups of cows. Bulls for heifers, bulls for maternal calves, and bulls for terminal calves. Consider breeding a calving ease bull to mature cows- you are giving up additional growth with that mating. Sexed semen causes the differences in sexes of the calves that we would expect to see. The number of bulls and heifers in a calf crop can be skewed even if we do one round of artificial insemination followed by natural service. Perry's groups used 6 herds with 878 cows breed to 5 different bulls. They used conventional semen and sexed semen from each bull. Gender skewed semen had a pregnancy rate of 52.4% and conventional semen had a pregnancy rate of 67%. When cows have displayed estrus (been in heat) at time of AI, pregnancy rate was 6
77 comments
Location: Brookings, SD 57006, USA
Read more

Benefits of a Shortened Breeding Season 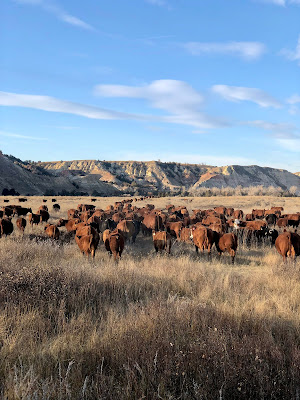