The cattle were raised and owned by Bob and Elaine Yackley of Onida, South Dakota, and fed at a custom feed yard. A total of 91 head of 2015-born steers comprised the group that was DNA tested with Igenity Silver and followed through harvest to obtain carcass data on each individual animal.

The top 25 head with the highest DNA scores for Average Daily Gain (ADG) and marbling were compared to the bottom 25 head, which exhibited the lowest combined DNA scores for the same two traits. Summarized results for the two groups are shown in the table. 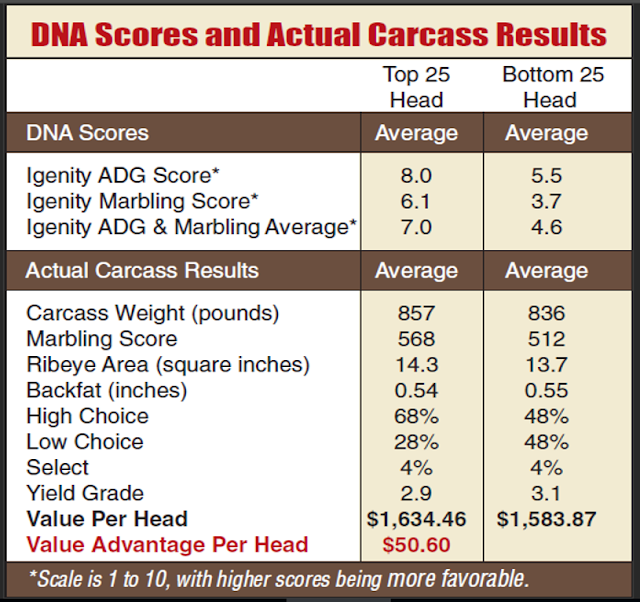 Even in a softened fed-cattle market, the difference in value between the two groups was $50.60 per head favoring the high-DNA-scoring steers. Weight and marbling make a big difference when selling cattle on a grid.

“These cattle had the right combinations of genetics and management in addition to being fed to the correct endpoint,” explained Gary Fike, RAAA director of commercial marketing. “The fact that out of the 50 head in this comparison, there was only one Yield Grade 4 in the low-DNA group and none among the top-DNA steers, is a testament to that.”

Fike, who organized and conducted the field study, further noted that these results demonstrate how DNA can be successfully used in commercial operations. “This is real-world data,” he said. “By using DNA testing and eliminating low-scoring animals for the traits of interest, producers can be confident they are building superior genetic value into their herds. That is why we recommend testing all replacement heifer candidates and culling low-scoring females before breeding."

The Red Angus Association of America serves the beef industry by enhancing and promoting the competitive advantages of Red Angus and Red Angus-influenced cattle. RAAA provides commercial producers with the most objectively described cattle in the industry by seeking and implementing new innovative technologies based on sound scientific principles that measure traits of economic importance. For more information, visit redangus.org.