Generally, ultrasound information is collected on seedstock animals at a year of age. When an ultrasound is collected, up to four measurements are taken. The most common measurements recorded include intramuscular fat, backfat, and rib eye area which serves as the best indicators for carcass marbling score, carcass back fat and carcass ribeye area. 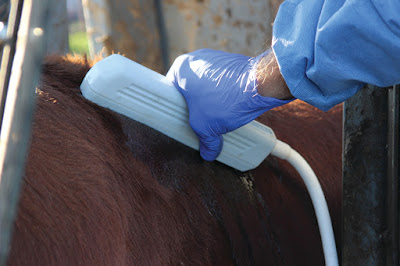 The ultrasound information is collected via a probe that emits high-frequency sound waves. The probe is placed on the animals back and an image is created that shows the difference between different tissues under the animal’s hide. These images are captured by a certified ultrasound technician and then sent to an ultrasound processing lab that analyzes the images and records the measurements.

In the genetic evaluation, ultrasound and actual carcass records are combined in a multiple-trait analysis. EPDs for carcass traits are calculated using two multiple trait analyses. In one analysis the Marbling and Back Fat EPD are produced. In the second analysis the Carcass Weight and Rib Eye Area EPDs are calculated. In both analyses, the data on carcass records and ultrasound information is used simultaneously through the genetic correlation between the traits. This genetic correlation between carcass and ultrasound measurements are moderate to high in nature. This means that many of the genetics that drive expression of the ultrasound indicator are the same as the carcass expression of the trait.

For all three traits, we compare the difference in the average EPD values from animals born between 2000 and 2018 that have an ultrasound record (blue line) versus animals that were not ultrasound scanned or had genotype information (orange line). The trends show that the animals with recorded ultrasound data had an improvement of 0.01 Marbling scores, 0.03 inches squared, and -0.02 inches for Marbling, Rib Eye Area, and Back Fat EPDs over animals that did not have that data recorded during that time frame. 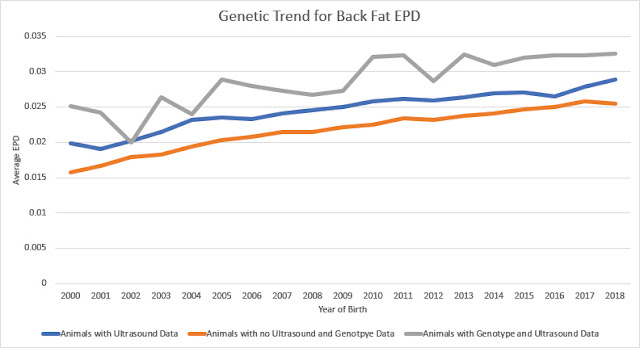 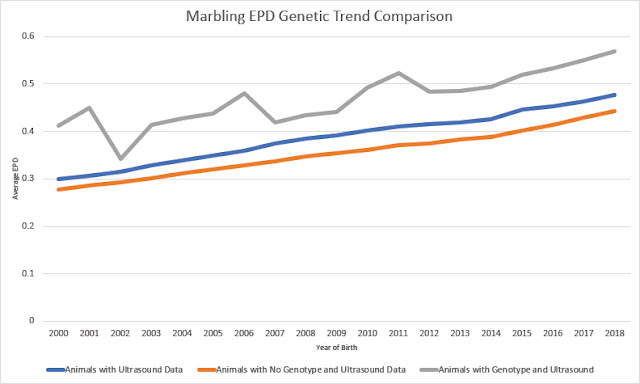 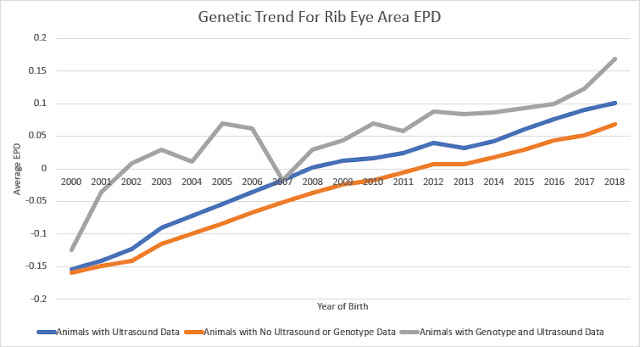 Genotype information was first available to Red Angus members in 2012. Hence for that group, the genetic trend lines are not as consistent as the other groups that contain more records prior to 2012. If we compare the trends for animals that have genotype and ultrasound information since 2012 to animals that do not have either piece of data recorded, the trend shows advantages in average EPD of 0.02, 0.02, and -0.001 for Marbling, Rib Eye Area, and Back Fat, respectfully. Looking at the advantages in the different EPD changes over time show the advantage of collection and recording data for carcass traits on seedstock animals. By recording this information, it allows for increased accuracy of selection and more rapid genetic improvement for carcass traits.

Penis Enlargement cream from doctor OLU said…
Herbal Penis Enlargement product is 100% guarantee to Enlarge and get a better ERECTION ,
the reason why most people are finding it difficult
to enlarge Penis is because they bedlieve on medical
report, drugs and medical treatment which is not
helpful for Penis Enlargement . Natural roots/herbs are the best remedy which can easily Enlarge your Penis permanently
Contact Dr Olu via Email : Drolusolutionhome@gmail.com or via WhatsApp : +2348140654426 for Natural root and herbal remedies put together to help you get Enlarge and Erect healthy.
Thank you.
November 4, 2019 at 5:58 PM

Bruce David said…
Hello everyone..Welcome to my free masterclass strategy where i teach experience and inexperience traders the secret behind a successful trade.And how to be profitable in trading I will also teach you how to make a profit of $12,000 USD weekly and how to get back all your lost funds feel free to email me on( brucedavid004@gmail.com ) or whataspp number is +22999290178
November 13, 2019 at 7:20 PM