Cattle genetics will be the focus of a new set of webinars to help cattlemen and women better use the tool in their operations.  The National Cattlemen’s Beef Association is teaming up with six genetics specialists from across the country to offer the NCBA Cattlemen’s Genetics Webinar Series, which will kick off Jan. 18, 2018.

Titled “Fake News: EPDs Don’t Work,” the January webinar will be followed by sessions in February, March and April that explore other aspects of genetic utilization that will give cattle producers a knowledge boost on cattle selection and breeding.

The Cattlemen’s Genetics Webinar Series is being coordinated by the NCBA producer education team. The January session on EPDs will feature Van Eenennaam and Spangler, with other members of the eBEEF team conducting future webinars.

According to Josh White, NCBA executive director of producer education, the genetics webinar series is an extension of NCBA educational webinars started several years ago. “Our model has been to do six or seven timely and seasonal webinars a year, geared to times that producers are looking at specific production practices,” White said. “We noticed that some of our largest viewership has been when we focused on genetics in the spring. We are excited to be partnering with the eBEEF team to expand the offering in 2018.”

Darrh Bullock said the eBEEF team was created to expand the understanding of genetics beyond their own states. “Genetics specialists are a limited resource,” he said. “Even though we provide education in our own states, we feel an obligation to provide more education on a national basis, recognizing that many states don’t have genetics specialists.”

Bullock said one of the creations of the eBEEF team is a website on eBeef.org where cattlemen can find out much of what they need to know about the genetics of beef cattle, featuring videos, factsheets, frequently-asked-questions and other resources. The new opportunity to work with NCBA on the webinar, he said, is an extension of the team’s outreach.

“We have worked informally with NCBA for years, through Cattlemen’s College and individual webinars on genetics,” he said. “This new program is an opportunity to provide cattlemen with more information in advance of the upcoming breeding season, getting them up-to-date genetics information. There really is no better way to get the word out about this topic than through NCBA and the educational programs they coordinate. They reach many cattlemen.”

Bullock said the upcoming webinar series is geared for any producer who would benefit from genetics knowledge, from the experienced seedstock breeder to someone who might be new to the cattle industry and needs to better understand genetics.

Cattle producers are invited to join the webinars live, or access recordings of them following the sessions. For more information on the NCBA Cattlemen’s Genetics Webinar Series go to the producer education tab of the NCBA.org website. Recordings of previous webinars are also available on the site. 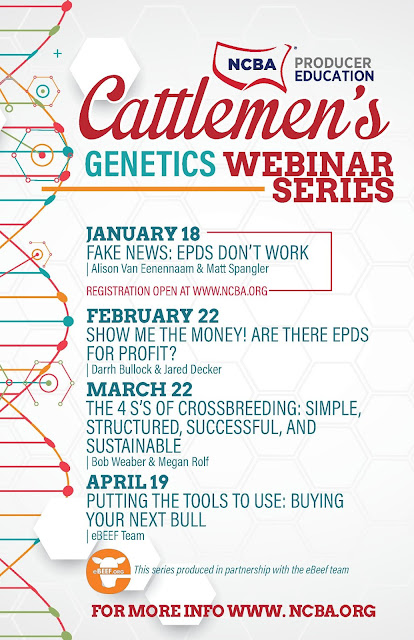